What is a Rube Goldberg Machine? Take a look at this classic video.

Get a bunch of building materials together. Tinker toys, pool noodles, marble tracks, books, tape (masking and clear), wooden blocks, legos….you get the idea. Now watch the videos above and below and let your imagination start working. Start with a track of some kind and a ball. Most Rube Goldberg machines have a ball that runs on a track that triggers other elements to move along the path to get to the end.

Here’s another example from a commercial for Sharp’s Touch Wood Phone: 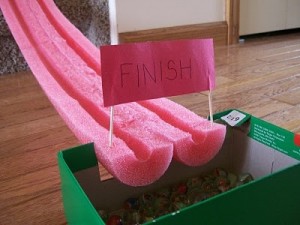 A Little bit about Rube Goldberg

Excerpted from: http://www.rubegoldberg.com/about
“Rube Goldberg (1883-1970) was a Pulitzer Prize winning cartoonist, sculptor and author.
Reuben Lucius Goldberg (Rube Goldberg) was born in San Francisco on July 4, 1883. After graduating from the University of California Berkeley with a degree in engineering, Rube went on to work as an engineer for the City of San Francisco Water and Sewers Department.

After six months Rube shifted gears and left the Sewers Department to become an office boy in the sports department of a San Francisco newspaper. While there he began to submit drawings and cartoons to the editor until he was finally published. Rube soon moved from San Francisco to New York to work for the Evening Mail drawing daily cartoons. This led to syndication and a national presence – and the rest is history.

A founding member of the National Cartoonist Society, a political cartoonist and a Pulitzer Prize winner, Rube was a beloved national figure as well as an often-quoted radio and television personality during his sixty year professional career.

Best known for his “inventions”, Rube’s early years as an engineer informed his most acclaimed work. A Rube Goldberg contraption – an elaborate set of arms, wheels, gears, handles, cups and rods, put in motion by balls, canary cages, pails, boots, bathtubs, paddles and live animals – takes a simple task and makes it extraordinarily complicated. He had solutions for How To Get The Cotton Out Of An Aspirin Bottle, imagined a Self-Operating Napkin, and created a Simple Alarm Clock – to name just a few of his hilariously depicted drawings. ”