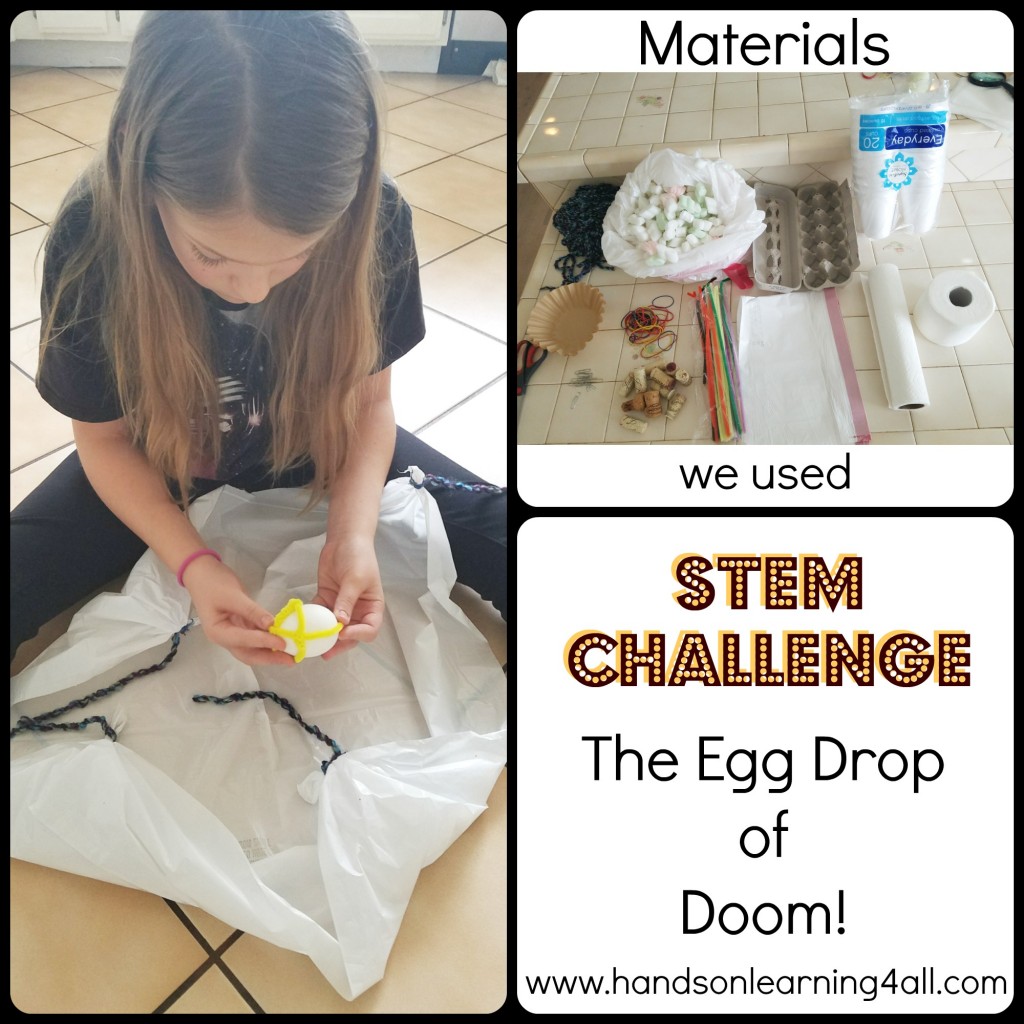 If you liked the first Egg-cellent Egg Experiment: Rubber Eggs your little engineer is going to love this egg-speriment called the Egg Drop of Doom. 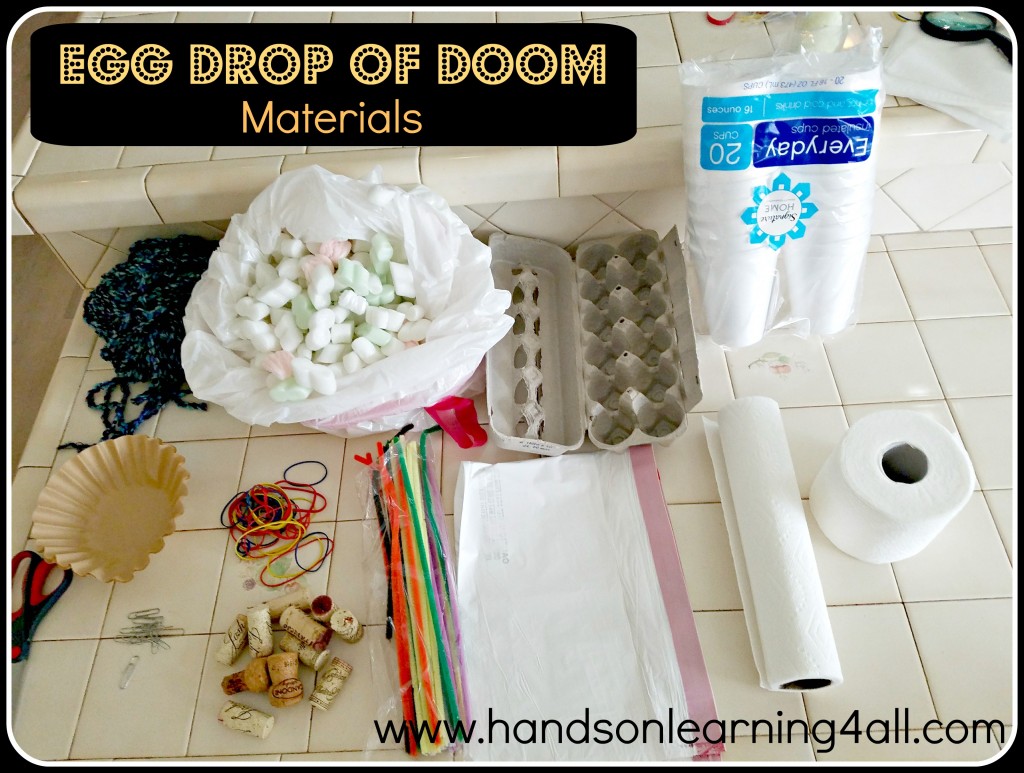 *These are the materials I offered to build the ‘egg saving devices’. Not all of these materials were used by the student. You can add / subtract from this list based on what you have as recycled materials available. Bubble wrap, cardboard tubes, and plastic bottles are some of the materials I might include next time.

What you should do:

Discussion: We talked about the egg shell and how it is actually pretty tough to break if you are just squeezing the egg, but once you apply sudden pressure the shell cracks. We also discussed how this is important for a baby chick who may be developing inside the egg. The mother hen sits on the egg (that’s a lot like our squeezing the egg) and the baby remains safe inside. When the chick needs to get out of the egg (after it is developed) it uses it’s beak and egg tooth to crack the egg with tapping, much like we do when we want to crack unfertilized eggs to eat them.

Next we talked about some of the devices we use to keep us safe in case of sudden impact in the car and on an airplane. We discussed seat belts, air bags, and parachutes. We also discussed bike helmets and pads like elbow and knee pads.

Then I explained the purpose of the challenge was to build two devices that would save the egg from cracking when dropped from about 12 feet off of the ground using the materials displayed and gather data. Then we would build a third device (if necessary) based on the data we collected.

What we did next:
First we developed a system to record the damage that occurred to the egg as a result of a drop. My student developed a measurement scale from zero-five; zero was no damage and five was cracked all over / too many to count.

Then she dropped a control test egg from the 12 foot mark to see what an unprotected fall looked like.

Finally she started on creating her first ‘egg saving device.’ 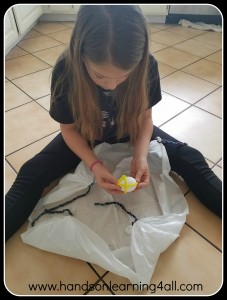 I used a stop watch and recorded the time it took for the egg to hit the floor after it was dropped and she dropped the egg from the 12 foot mark which happened to be our second story landing. (You can use an outdoor jungle gym or a ladder too. We decided upon the height of the drop. Your height can be different.) 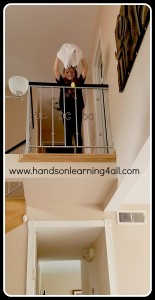 After her first drop she recorded her results onto a chart. 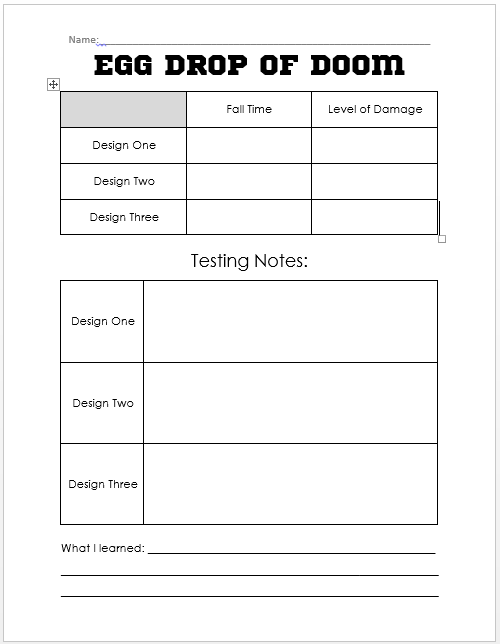 Then she began to develop her next egg saving device. She had recently watched the Dumpster Diving Mythbusters episode and thought that a mattress style device might help to break the fall of her egg. She really did some critical thinking with this one. She put the cushioning pads outside the ‘mattress’ center to help protect the egg in case it bounced out of the center of the box. She also decided that the lid provided a nice ramp for the egg to roll down just in case it bounced in that direction. 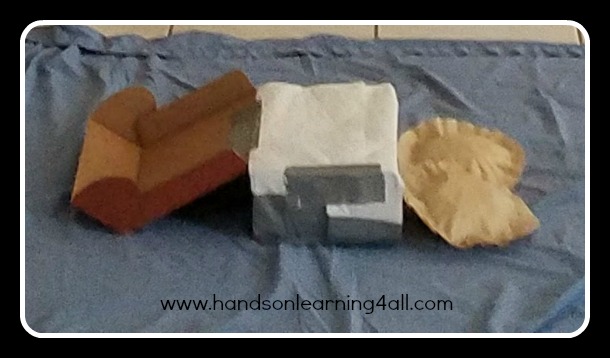 As luck would have it the egg bounced backward, not to the left or the right. So it was saved by the mattress but then cracked when it bounced out and onto the floor. She then evaluated all of the eggs to come up with another device. 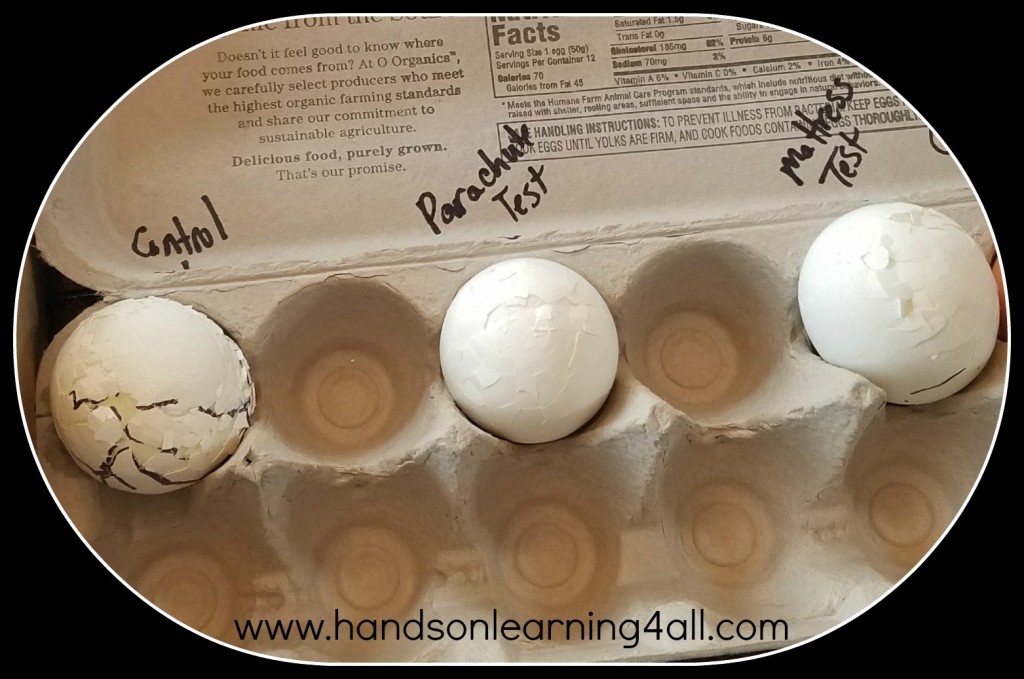 Her final device incorporated her original idea of a parachute and her second idea of a mattress with the added bonus of the egg being trapped within a cushion inside of two cups. The cups would insure that the egg would not be able to bounce out and crack on the floor. (I considered this to be an ingenious idea.) AND after testing she discovered that the egg did indeed fall without injury! 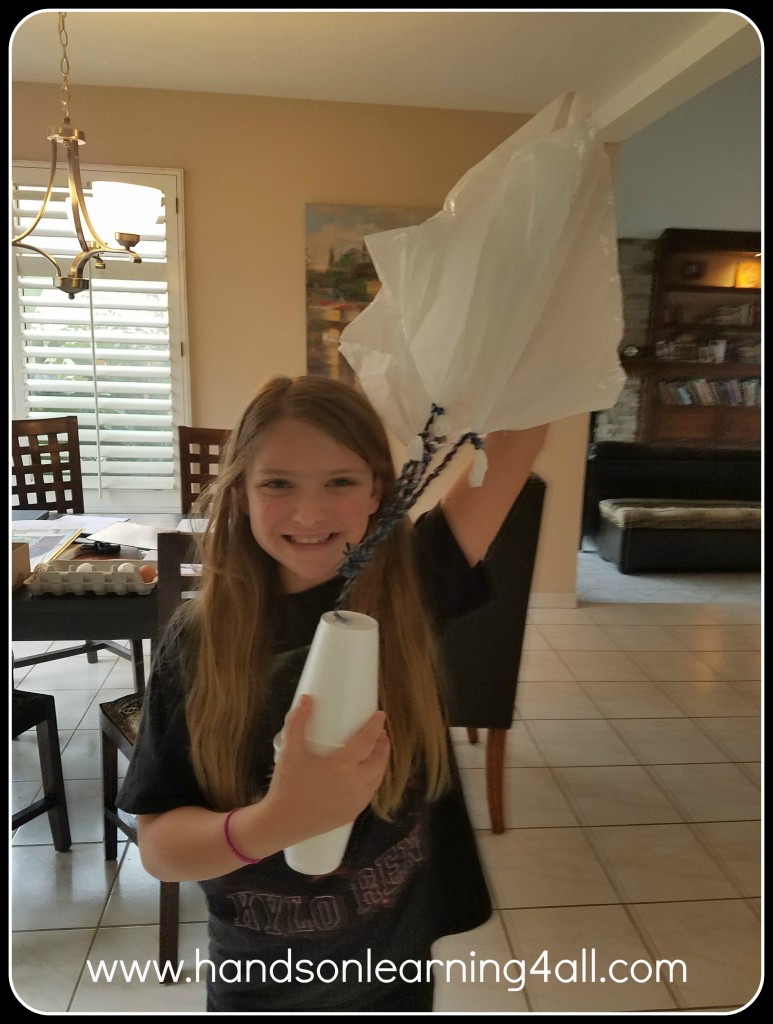 This experiment was so much fun that my husband even felt inspired and tried to make an egg saving device. 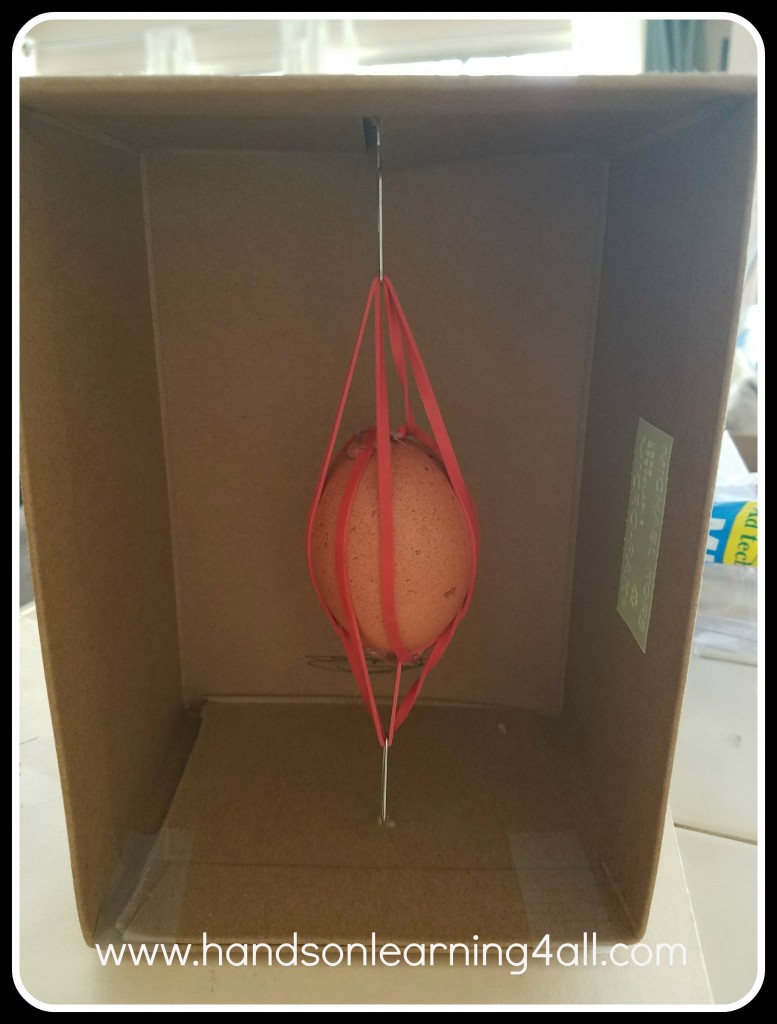 His egg faired well until (like the mattress) it bounced sideways and cracked the egg. Never-the-less this egg-cellent lab was so much fun to do AND a great critical thinking STEM activity.
Ready for one more Egg-cellent Egg activity? Click here for one more science based activity to do with your kiddos that is a fun too!